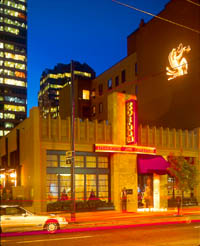 There’s something dark, elegant and suggestive of extravagance in the name Gotham. Gotham Steakhouse and Cocktail is a high-end steakhouse in downtown Vancouver, Canada. As its name might suggest, the interior of the restaurant is dark, elegant and yes, even somewhat extravagant in its brooding glamour. Tones of rich, chocolatey brown abound on the walls and in the furnishings, larger than life artwork evokes a stylized version of the swing-jazz era.

The menu is brief and honest as should be expected from a restaurant under the same ownership as Hy’s Steakhouse. At Gotham, there is even more emphasis on serving the best version of traditional steakhouse fare. You are offered simple appetizers, like shrimp cocktail, fried calamari, oysters, crabcakes, beefsteak tomato and red onion salad with blue cheese. We highly recommend the Caesar Salad; we’re always seeking out a version with the best spin on this familiar recipe (must include copious quantities of garlic, of course). Gotham’s take on Caesar was a hit.

Accompaniments to your steak main course (would you really choose anything else?) are served “family style” to share. To put this in perspective, even the potato was supremely shareable and at the recommendation of our server, this is precisely what we did. Half of an enormous, Baked Idaho potato was served to each of us. Even looking at this beast gave me carpel tunnel syndrome. We soon stopped gawking and started eating as we drowned this perfectly baked treat in butter and sour cream.

The steak was quite divine. Devoid of decorative sauces or distracting spices, we were served generous portions (the porterhouse being consumed next to us nearly tipped the table) of perfectly medium rare, beefy goodness. Definitely a steak worth writing home about and coming back for.

We accompanied this much anticipated meal with an absolute treat – the Torbreck RunRig 2001 (Barossa Valley, Australia). This wine is a true gem – a deeply-coloured, full-bodied shiraz with intense flavours of berry, espresso and spice and a wonderfully long finish. It is sure to please palettes that seek out the bold and the beautiful! You need something big to go with your honest-to-goodness steak at Gotham, so go large and get the RunRig or something like it (if you can!).

We recommend Gotham for its swing-era ambience, friendly service, and food that does not pretend to be anything other than it is – simple, top quality, and awesome.

For more information or to make reservation, call (604) 605-8282 or visit www.gothamsteakhouse.com. 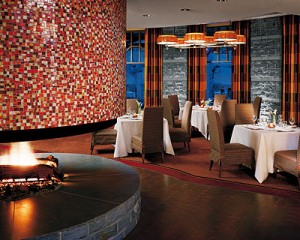 Visiting the Four Seasons Whistler’s Fifty Two 80 Bistro as we did in October requires a bit of imagination. Whistler is, after all, a skiing town and the white stuff isn’t truly in its element for a few more months. We therefore had to imagine throngs of people clad in snowflake patterned sweaters layered over thermal underwear turtleneck tops sipping beverages après ski by the fireplace in the large lounge at the restaurant’s entrance. Of course, our reverie could just as easily place gentlemen in classy suits and ladies in little black dresses sipping cocktails amidst this lounge’s luxurious leather furnishings and tasteful décor. Though described as a casual restaurant, the décor and menu will not disappoint those in the mood for slightly a “finer” experience.

The décor of the main dining room is fresh, modern and inviting. Warm, earthy, and peachy tones are complemented by wood accents that reflect the glow of the open stone fireplace. (There is also a fireplace outdoors for al fresco dining in the summer months.) Everything at the Four Seasons Whistler, including the Fifty Two 80 Bistro (named, incidentally after the 5280 foot elevation of Whistler’s famous Blackcomb Mountain), is attractive and in impeccable shape at this relatively new hotel.

Fifty Two 80’s a-little-bit edgy menu is seafood-inspired, with daily creations served up from the bounty of the Pacific Ocean. We were urged to begin with a taste from the “live-action seafood bar” featuring prawns, freshly shucked oysters, lobster and other tasty bites. We sampled crab and lobster “raw shots” – amazingly tender morsels of these tender shellfish were actually served in a shot glass on a tiny bed of frisée lettuce. These tasty teasers are also served with homemade specialty sauces – I definitely recommend the  tantalizing, fresh, green goddess sauce.

Seafood is king at Fifty Two 80. Sure, the daily changing menu serves up share of chicken, prime rib(and even turkey with stuffing on the Canadian Thanksgiving holiday which occured while we were there), but restaurant specialties here revolve around things with gills or some mode of breathing under water. We visited the Bistro twice during our stay at the Four Seasons and sampled several items from the menu. Between those two visits, for first-courses (following seafood “raw shots”), we enjoyed a Golden Beet Salad with lightly breaded, warmed goat cheese and a tarragon dressing, House Smoked Wild Salmon on potato blinis with dill cream, and steamed mussels accompanied by frites and a spicy mayonnaise dip. Seafood reigned for our main courses. Generously sized garlicky prawns with a refreshing tomato salsa served with a mixed green salad was one evening’s choice – and then the highly recommended Black Cod with sweet corn and chanterelles. Desserts were rich and indulgent, such as the simply and aptly named “Chocolate” – a medley of chocolaty treats such as a Bailey’s and chocolate fudge morsel and sour cream and chocolate chunk ice cream.

We found the wine list to be rather small and quite focused upon British Columbia wines. It provided an interesting  rather than stellar selection. We had the Cedar Creek Platinum Reserve Chardonnay, 2002 on the first night, which was notable for its light, non-oaky taste. The next night, being in an eclectic and celebratory mood, we began with Sumac Ridge Brut from the Okanogan Valley – not exactly a creamy Champagne, but a still a nice beginning to a meal. We then took advantage of the half bottle offerings and had both the Blue Mountain Chardonnay 2001 and the Cedar Creek Estate 2002 – the second better than the first.

Service was quite good – very friendly, and servers had good knowledge of the menu. As for dress code, think presentable (change out of your ski gear), but not overly formal.

For more information or to make reservations, call (604) 935-3400 or visit http://www.fourseasons.com/whistler/dining.html